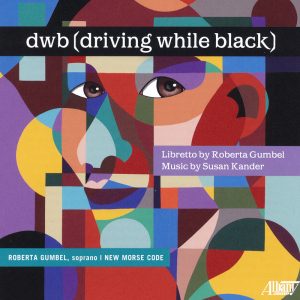 Stream on Spotify or your favorite digital platform.

for African-American female soprano or mezzo, cello and percussion

For more information on performance rights and rental, contact Trudy Chan at blackteamusic.com, Deborah Horne at subitomusic.com, or Susan@susankander.net

Complete video available for perusal and for licensing for streaming to groups. Contact Susan@susankander.net for more information.

Librettist’s note:
“Singers are storytellers,” says Roberta Gumbel, “but rarely do we get the opportunity to help create the stories we are telling.” dwb is constructed out of two interwoven strands, one personal, one external. In the central narrative, we meet the Mother: a baby is born to happy parents; she frets at the father to put the all-important car seat in the back seat of the car properly. From here on, she relates to the child first in its seat facing backward in the back of the car, then facing forward, then eventually the child sits next to her in the front seat on the passenger side. This is how Time is marked; the car is ever the center of their lives. The Mother scenes move forward in time from the beginning to the end of the piece. Threaded between these scenes, punctuating them, are telegraphic vignettes of contemporary news bulletins or personal stories introduced in spoken words by the musicians. They have a different instrumental color and texture from the Mother scenes, as if a channel has been switched. The Singer sheds her role as Mother and, taking on different characters, (young, old, male, female) relates specific but generic events. These all describe, without comment, the dangerous world beyond the Mother’s control, and the increasing anxiety building up in her mind as her “beautiful brown boy” approaches age sixteen and his much-desired independence. How does she summon the courage to hand him the keys to her car and let him go?

Composer’s note:
Roberta Gumbel and I waded into new waters in so many ways with this piece. Her first libretto; my first collaboration with a librettist other than myself; my first work with the ground-breaking duo New Morse Code, who are swiftly letting the world know that the orchestrational possibilities embodied in one cellist and one percussionist are, at least in their hands, vast. I chose to build the percussion centered on the vibraphone because it offers so many different timbres and durations and easily provides a harmonic bed. Beyond that are twenty more instruments the percussionist will hit, swipe, rub, blow and kick. The cellist’s part goes beyond the cello (toy piano, tambourine), including a brief stint in the percussion area. One scene is almost entirely done without any instruments beyond the human body, a twenty-first century reference to juba or ham-boning. Both instrumentalists are also drawn into the telling, because even though this is technically a one-woman show, no one in this story is ever alone. We’re all in it together.

Gramophone: “Its consoling lullaby is an iconically memorable ‘My beautiful brown boy…. [The opera] …chronicle(s) reality with unblinking intensity.”

The Washington Post: “powerful…searing sung drama… an examination of Black motherhood in America that more people need to see”

musicweb-international.com: “A remarkable work…. Kander’s structure emerges on this recording with…clarity, as does the brilliance of her imaginative orchestration…. With her silvery soprano, Gumbel sings with an emotional range as wide and penetrating as the colors of her voice.

blackgrooves.org: “Kander wrote a score filled with musical dimension and complexity. Her use of color and dissonance is punctuated by Gumbel’s libretto.”

Classical Voice North Carolina: “it should be required listening”

Seenandheardinternational.com: “Kander and Gumbel’s greatest achievement is to pierce the noise and frenzy of the 24/7 news cycle and shed light on what it is to be Black in twenty-first century America.”

The Pitch: Kansas City’s Arts and Culture Newspaper: Best of Kansas City: Theater Award, 2019 “In pinpointing and relating the terror racial biases and injustices cause, Kander and Gumbel created one of the most singularly devastating theatrical moments of the last year.”

To contact Susan Kander, please send an E-mail to susan@susankander.net.

Susan Kander’s works are published by:

There are no upcoming events at this time.